Preparing baked ribs is an art. Let's say it's not a complicated process, at all, but it does require knowing some secrets and of course, a lot of patience. The pork ribs are not done in 1 hour, nor in 2 ... you need 4 hours of cooking to make them perfect.

Well, nothing, I'll show you how to make perfect baked ribs, obvious, ribs of pork.

You need to have 3 things:

As a rule of a piece of about 12 ribs, eat 2 people (6 each). You can get with pieces whose ribs are small, then you would need more, or some larger ones that might fill you up faster.

Try to get a rib that has a good amount of bone and meat. Sometimes you go to the butcher shop and they sell you a piece that is almost all pure meat and although it sounds tempting it is not the idea, we want rib bones, right there is the flavor.

You can clean a little the excess fat of the ribs that you have acquired, but neither you go crazy removing it too much.

The mixture of spices

Well, here we enter the world of subjectivity and creativity . Everyone can prepare their own spice mix to make these baked pork ribs.

I'll explain what spices I use, and you can follow my recipe or you can use mine to inspire you and do the your own.

Here you can also see the creativity of the person who is going to cook.

As a general rule, barbecue sauce I prepare it as follows:

Saute the garlic and onion, add all the other ingredients and let it cook over low heat for 20 minutes, check the salt and when you have the thick consistency of a sauce remove from the fire and reserves.

You can also put chopped apples, a touch of orange juice, pieces of pineapple ... creativity is magic 🙂

Like not all ovens are the same, and since pork rib pieces can be more or less small, with more or less thickness, cooking times can vary, so you should be careful with this.

The essential thing you should know is that you should cook the pork ribs for approximately 4 hours at a temperature of 120-130ºC. Of these 4 hours, the first 2 and a half hours you will have them in the oven covered with aluminum foil.It should not happen, but there are treacherous ovens.

During the last 10 minutes you will bathe your pork ribs with the barbecue sauce that you prepared previously.

You can also bathe them from before, adding one layer every 30 or 40 minutes. But experience tells me that it's just 10 minutes before it's worth doing.

Also in these final minutes you can raise the temperature in the oven if you want the oven-baked ribs to have a brown color and finish. more "toasted", which is not the same as burned, careful.

Finally, the trick to know if they are ready: puncture the meat with a fork or a toothpick, if you do not feel resistance to the enter it is already there.

Anyway, after 4 hours of cooking, unless your oven is damaged, the pork ribs are going to be done. 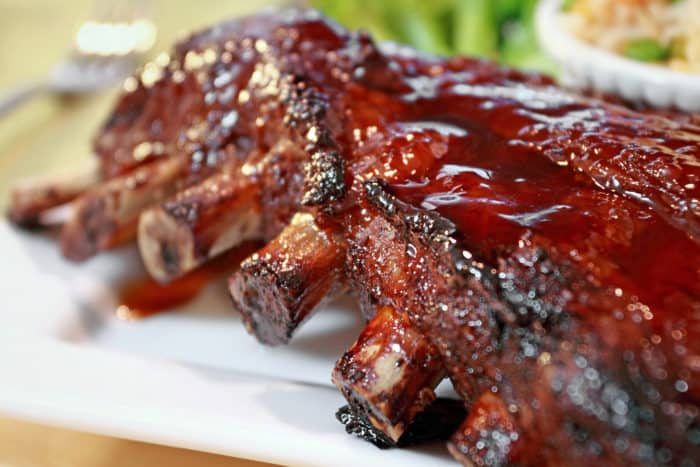 At the end of the post you have the printable version of this recipe.

Finally remember: eat them with your hands and suck your fingers later.

If you do not want to use barbecue sauce for your baked ribs, you can try one of these:

Finally, remember not to abuse eating too many.

This is one of the recipes that gives more satisfaction to those who prepare. Accompany baked ribs with chips or a fresh salad. 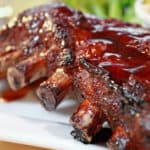 Step by step recipe for that you can make the best pork ribs in the world.Bake for 2 and a half hours approximately.